I don’t judge anyone who hasn’t heard of this movie. It’s barely a cult classic. People just don’t know it due to poor marketing and a poor economic and political climate when the movie “Jekyll & Hyde… Together Again” (trailer above) was originally released in 1982. Blatantly, the movie was about drug abuse and sex, two fairly unpopular topics with the Federal Government at the time. Hollywood, and society at large, were quickly backpedaling from the excesses of the 1970s. After all, inflation was poppin’ harder than our modern time, energy prices were at premiums, the Russians had just invaded Afghanistan, there was a new STI that killed people and they didn’t know what it was (HIV/AIDS), and low-and-behold someone figured out that cocaine was addictive. (continued below) 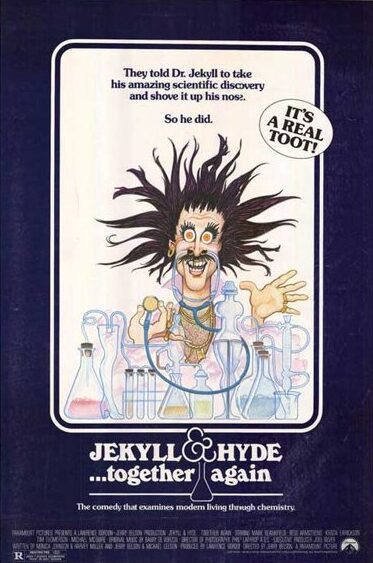 This isn’t an oscar winning movie, but if you enjoy physically and witty comedy, I can highly recommend this movie. It was overlooked for its obvious flaws at the time of its release. Hell, Roger Ebert panned the shit out of this movie. 1 out of 4 stars from the legendary reviewer…. but it’s not that bad, and parts are hysterical. I don’t want to give away a single good, or poor part of the movie, but pay particular attention to the dialogue and physical comedy. I don’t think you’ll regret it if you are finishing this article, and still interested.